Recently the president celebrated the opening of the pipeline from Mandan, North Dakota, while blaming the Paris Accords for job-losses in the U.S. This prompted me to re-post an Earth Day blog from many years ago, feeling iot remains relevent:
http://atellingexperience.blogspot.com/2011/04/earth-day-2011.html

This is an exciting time to be involved in Storytelling and Education. As I see it, our Cultural Mythology and Personal Narratives are in a state of rapid transformation. In a way, we are moving from a sky-centered story to an earth-centered story. We are truly "coming down to earth." Still, we are moving against some strong anti-earth stories rooted in our American Dream (aka Myth). For example, here is a cover story from USA Today on December 10, 1997: 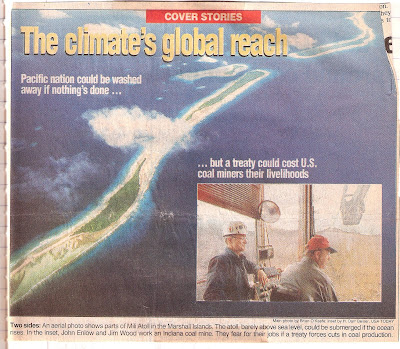 We are presented with a choice: adopt the Kyoto Accords and save the Earth or reject them and save American jobs. This is a classically self-involved American Story. Unhappily, at that time, we chose door number 2: jobs. Today, I think that has begun to change. Paradoxically, the motion back to earth from sky may have been sparked by our first effort to leave the planet entirely: the moon landing. For when our astronauts reached the moon, they sent us our first look at the earth (and ourselves) from space. That image still ripples through our consciousness and seeds the rewriting of our stories.
Posted by David at 12:31 PM 1 comment: