A Memory of Gilgamesh

Some short time ago the storytelling world lost a wonderful friend, artist, listener, and brilliant human being, Hope Baugh. She was for many years the Young Adult Services Manager at Carmel Clay Public Library in Indianapolis. She was also a vibrant storyteller, actor, teacher, and theatre reviewer. I feel blessed to have received the attention of her critical eye and to have been included in her voluminous theatre blog, IndyTheatreHabit.com. I have never felt so seen, honored, and appreciated by any other reviewer.

In memory and gratitude I post here her review of my presentation at Going Deep: Long Traditional Storytelling Retreat in 2009. Thank you Hope. 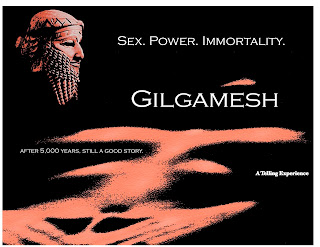 This is the fourth of four posts in a series about the third annual “Going Deep: Long Traditional Stories Retreat” held in Bethlehem, Indiana, on March 19-22, 2009.

The Storytelling
On Saturday night, the last night, I and the other retreat participants walked over to the Schoolhouse from the Storyteller’s Riverhouse to hear a version of “Gilgamesh” written and performed by David Novak and presented by A Telling Experience. Priscilla Howe introduced the show. Steve Boyar was the stage manager.

Yes, stage manager. David comes to oral tradition storytelling from theatre and, I learned later, from busking (street performance art that in David’s case includes clowning and mime.) His “Gilgamesh” piece incorporates the best from all of his backgrounds – the intimacy of storytelling, the interpretive skills of acting, the physicality of busking, and the design elements of theatre – to let his audience see that this 5000-year-old story is still a good one, and still relevant.

Steve is a storyteller, too – in fact, he and David met through one of David’s storytelling classes – but in this production he is content to stay completely behind the scenes. He told me later that the story is a little different every time. As the stage manager, he doesn’t follow written cues. He said, very modestly, “I just know the story.”

I imagine that being the stage manager of this storytelling show is a very organic and intuitive activity. Even though David and Steve have done a lot of work ahead of time and deeply considered each aspect of the show, the two men also co-create each performance as it goes along.

When the audience arrived Saturday night, the chairs had all been turned to face the small, raised platform at the end of the schoolhouse’s meeting room. The space had been outfitted with several theatre lights and extra sound equipment. Seven bamboo poles were stuck in weighted burlap sacks so that they stood upright. There was a pattern of smaller poles almost in a star shape – or maybe it was an arrow? – on the back wall, between two free-standing bamboo screens. Draped on the floor in front of the platform were two long pieces of brown plastic, with shards of clay and two or three loose bamboo poles strewn across them.

You can see a picture of a portion of the “set” with the house lights up in Priscilla Howe’s account of the “Going Deep” retreat on her blog.

I was delighted to learn later that every time David and Steve present this piece, they cut new bamboo canes from near their homes in Ashville, North Carolina. In my mind, this honors both the transience of oral traditional storytelling and the stagey quality of live theatre.

David wore black trousers and a subtly-striped, black and grey, short-sleeved shirt. He looked as if he had respected his audience enough to dress up, but his clothes also allowed him to move very freely, even incorporating joyful and impressive acrobatics from time to time.

The story was completely new to me. It went something like this:

Gilgamesh is the proud ruler of a magnificent city called Uruk. He is two parts female (from his mother, who was a goddess) and one part male (from his father, a human man.) He is raised mostly by his mother, but then a goddess makes and civilizes a friend for him, a man called Enkidu. Gilgamesh and Enkidu at first want to fight each other, but then they become best friends and witnesses for each other. They share many adventures, each of which has meaning. When Enkidu dies, Gilgamesh seeks immortality to ease his pain. After more adventures, more learning, and more pain, he finally finds peace instead. “Love the person you’re with, and eat the bread while it’s still warm.”

Oh, I am not doing justice to the nuances of the plot or the characters at all, but it is a powerful, powerful story, especially as David and Steve present it.

Later, when I learned the word “bromance” (buddy story about straight men) from a TV-watching colleague at my day job, I immediately thought of Gilgamesh and Enkidu.

And David and Steve, for that matter. I wish I had thought to ask them what their wives think of this show. This version of “Gilgamesh” is much more than a re-telling of the first recorded bromance, however.

My experience of the piece was as layered as the piece itself. I laughed a lot – sometimes in recognition, other times in surprise. At times my face was wet with tears. Other times I was almost unbearably turned on. And still other times I felt just plain pleased to be taken not only to ancient Sumeria but also to the nineteenth century and George Smith’s re-discovery of the ancient cuneiform tablets, and, through brief references to pop culture, to various decades of the last century. David (and Steve) made the whole, complex piece very easy to follow.

There were two parts divided by a ten-minute intermission. At the end, David passed around a loaf of bread that Steve had baked during the show. We all pulled off pieces to chew. It was delicious!

The Workshop
The next morning we all gathered in the living room of the Storyteller’s Riverhouse for David’s workshop.

He said he didn’t have any of the handouts or other things that we had enjoyed in the first two workshops of the retreat, but “I will give you myself as much as I can.”

This is no small gift. David’s mind is as well-stocked as the great library of Alexandria. He also has a knack for exegesis, for exploring and explaining something point by point, word by word, or in this case, artistic choice by artistic choice.

His “Going Deep” workshop was therefore more of a companionable, conversational lecture than an invitation to self-reflection or a hands-on introduction to ritual, but it was textured and fascinating, rich with both personal insights and scholarship. Even though it was very different from either Liz Warren’s workshop or Marilyn Omifunke Torres’ workshop, I found it equally satisfying.

David had brought an iPod in a small case that converted into a nifty little stereo system. He played the pre- show music as we all were getting settled with our notebooks and coffee cups. He had also brought a small crate of books. He spread them out in a loose pile at his feet, ready to hold up as he mentioned them in his talk.

He began by saying that he planned to go through the show again, sharing information about the artistic choices he had made. However, first he wanted to give everyone a chance to integrate the stories from the previous two nights as well as the one he had told. He asked everyone to help him create a conversation of images and moments from all three pieces, “Like an overture in musical theatre weaves together the themes of an entire piece.”

He said, “Present whatever image occurs to you as you’re remembering the stories. Listen to the images that others present and relate your images to those. But just speak the images, don’t talk about them. We’re not having a discussion yet, just weaving connections. It’s okay to have some silence in the conversation, too.”

Someone said, “The red horse in the Grail story...” and we were off.    Afterwards, I did feel more deeply connected to all three of the stories.

David said that he does this exercise with his storytelling students before they tell. They share images from their own stories, listening for possible connections and resonances. Then when the students listen to each other’s full stories, they listen in a more coherent, woven manner.

It also helps them begin to move into teller mode. “Beginning storytellers are often caught in a fixed text,” David said. “This exercise challenges the grip of the literary mind...The challenge is to move freely within the story...The mind of a storyteller is different from a writer or a reciter.”

I want to try this exercise with my own storytelling students.

For the rest of the morning, David took us back through the “Gilgamesh” story. He played bits of music from the show – some of which he had created himself using “Garage Band” – and explained each bit’s purpose, such as foreshadowing, or focusing, or filling in emotional gaps, or mirroring the fusion of elements in the story, etc.

He referred to other stories and to other artists’ performances. He referred to ideas, quotes, books, poems, songs, and theories. He referred to issues and information from his personal life and his own journey as a storyteller. He brought forth from his own mind and heart all kinds of items to deepen our connection to the Gilgamesh story through his explanation of his own creative decision-making for this piece.

I scribbled notes as fast as I could, only speaking up to ask how to spell things like “trochaic tetrameter.” I took way too many notes to share all of them here. I’ll just share a few of the many, many items that intrigued me in David’s talk:

I hope I get to hear David Novak’s telling of “Gilgamesh” again some time.

By the way, David sent me some production photos, too, but I loved the sexy ambiguity of the show poster, so that is what I used here on my blog. You can see photos of David and learn more about his work on his website, http://www.david-novak.com/.

Hope Baugh – www.IndyTheatreHabit.com. This entry was posted on Sunday, March 29th, 2009.
Posted by David at 11:10 AM No comments: